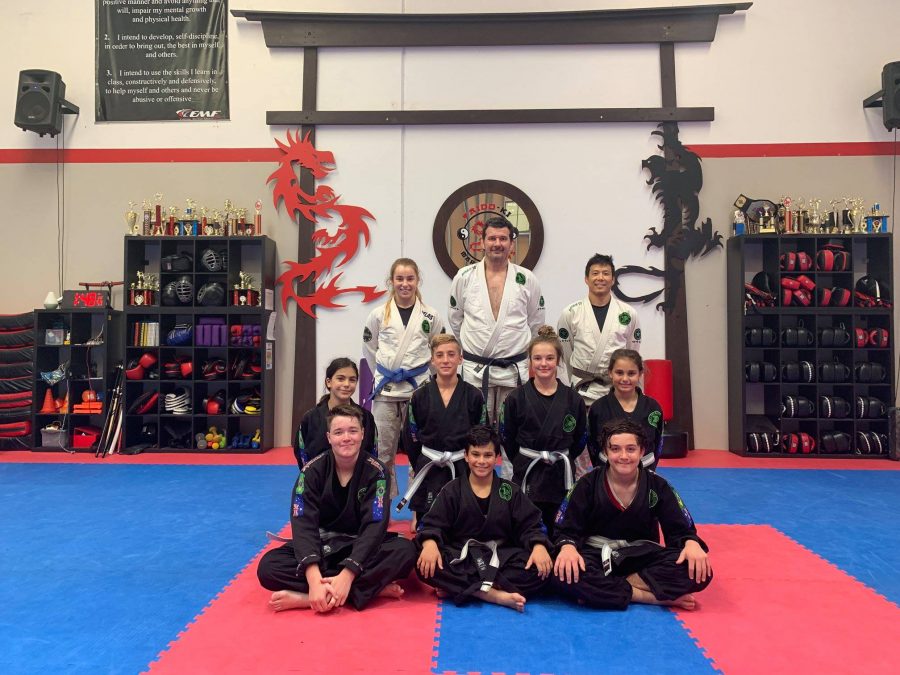 Make up grading, 3 Team Perosh BJJ Affiliate Gradings and 3 BJJ comps all in one weekend!

Congrats to the 7 students who graded in BJJ and Muay Thai Kickboxing make up gradings at Team Perosh.

There were 3 BJJ comps on the weekend and all a bit different! Michael De Marco had 2 matches that went to a draw in his Sub Only no gi matches and was part of the winning team. Guy Vaccaro won the Victorian BJJ State Championships with 3 wins for a gold medal. And the Team Perosh Kids Girls team Natasha Iacono, Jayda La Fleur and Emma Hunt competed in the Australian Girls in Gi. Well done to everyone that competed!

If your goal is to get fit, get better or become a World Champion then come and train with us at Team Perosh. Click below to register for your 2 week free trial. 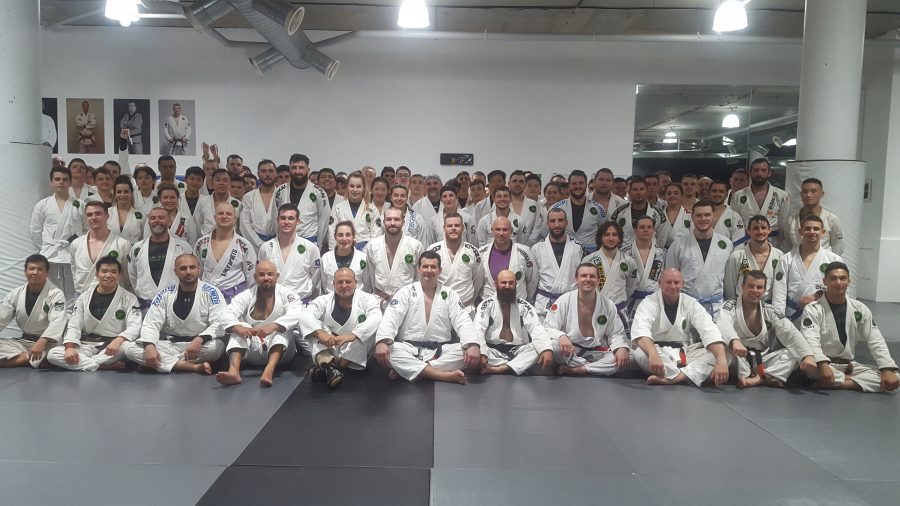 First gradings at Team Perosh Mixed Martial Arts in BJJ (Brazilian Jiu-Jitsu) and Muay Thai Kickboxing for adults and kids. About 275 students participated in the gradings with most of them grading to the next level.

If your goal is to get fit, get better or become a World Champion then come and train with us at Team Perosh. Click below to register for your 2 week free trial. 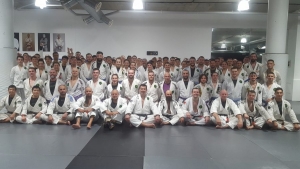 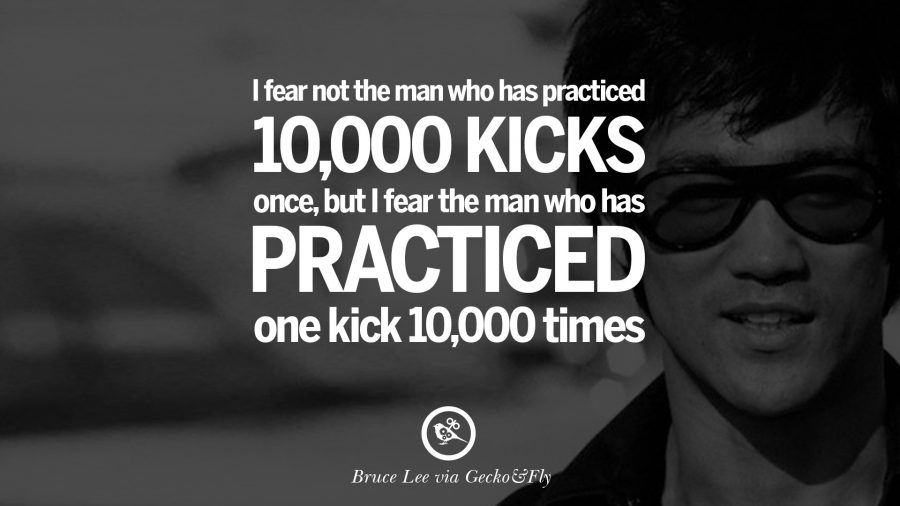 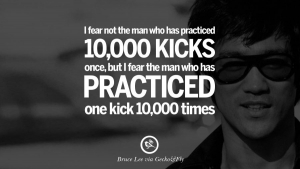 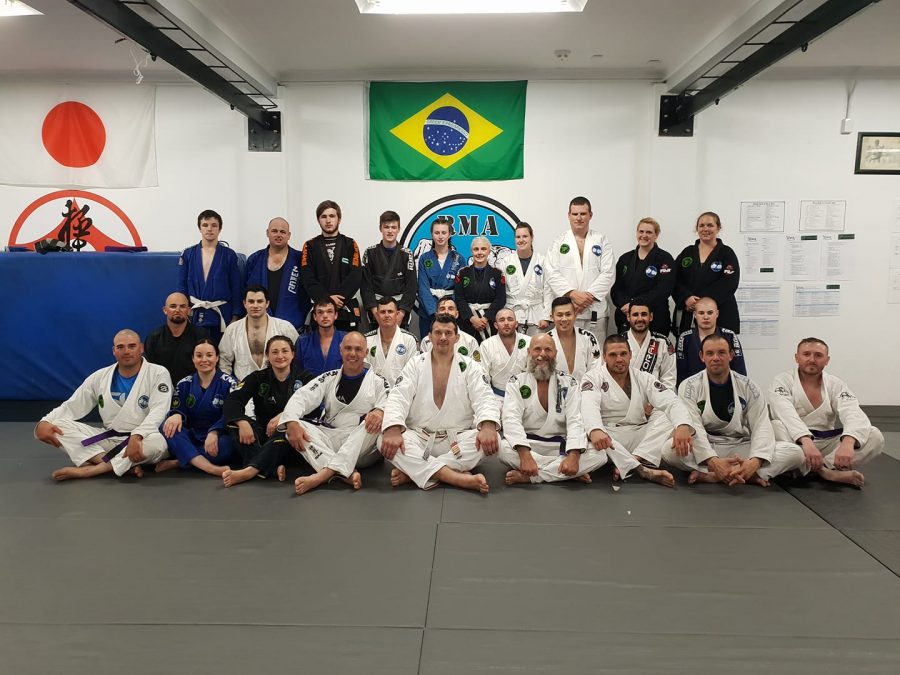 Team Perosh affiliate school IMC had their BJJ grading last Friday 7th December. Big congrats to everyone who graded. Extra special congrats to new BJJ Blue Belts Rys and James. Well done to the coaches at all 4 academies for getting everyone ready.

Team Perosh affiliate school RMA & Total Fitness had their BJJ grading last Wednesday on 19th December. No less than 8 students received their Purple Belt. These 8 students have been together since the start 6 years ago! Purple Belts were awarded to Frank, Peter, Elizabeth, Steve, Mitch, Bo, Francie and James. New Blue Belt was awarded to Mark and several students graded for their stripes on their white and blue belts. Big congrats to everyone who graded. I am very proud of everyone.

The Team Perosh Mixed Martial Arts end of year BJJ (Brazilian Jiu-Jitsu) and Muay Thai Kickboxing gradings for adults and kids was a big hit! About 275 students participated in the gradings with most of them grading to the next level.

In adults BJJ there were 4 new Black Belts, 1 Brown Belt, 1 Purple Belt and 8 Blue Belts awarded. Extra special congratulations to new BJJ black belts Ers Kumsuz, Dany Raad, Matthew Hunt and Phillip Ferraro. The students who did not receive a new belt all graded for their next stripe.

Next goal is attend the Christmas Party to celebrate a great 2018! 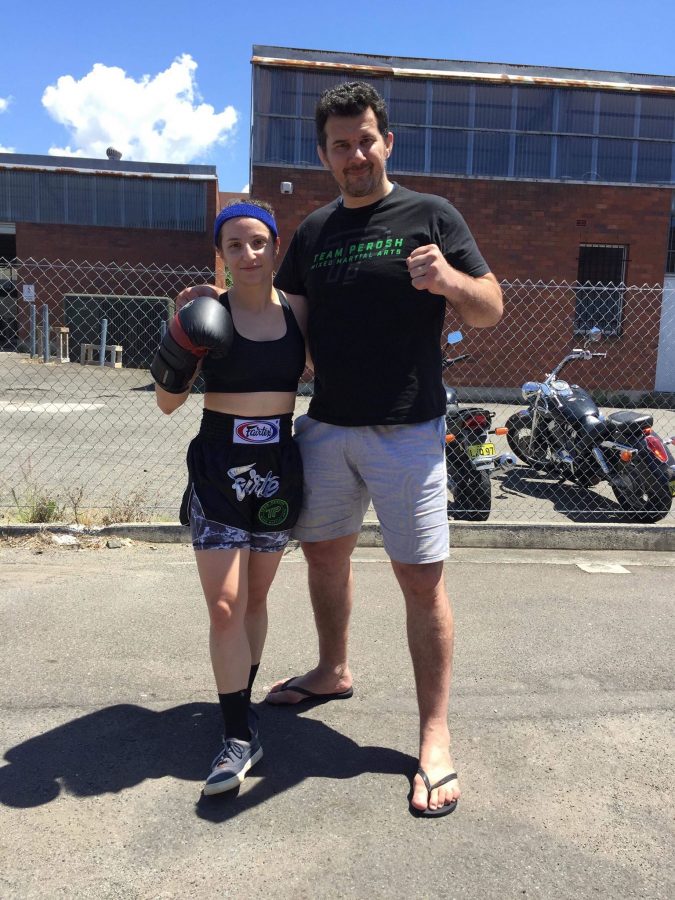 Team Perosh student Stef Boitano made her debut at the Muay Thai Kickboxing Development Day last weekend. It is run by the MTA. She lost a close decision. Well done to Stef and thank you to everyone who came to support! 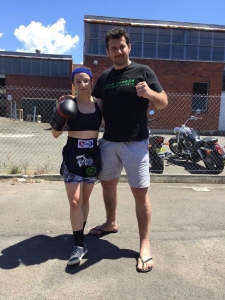 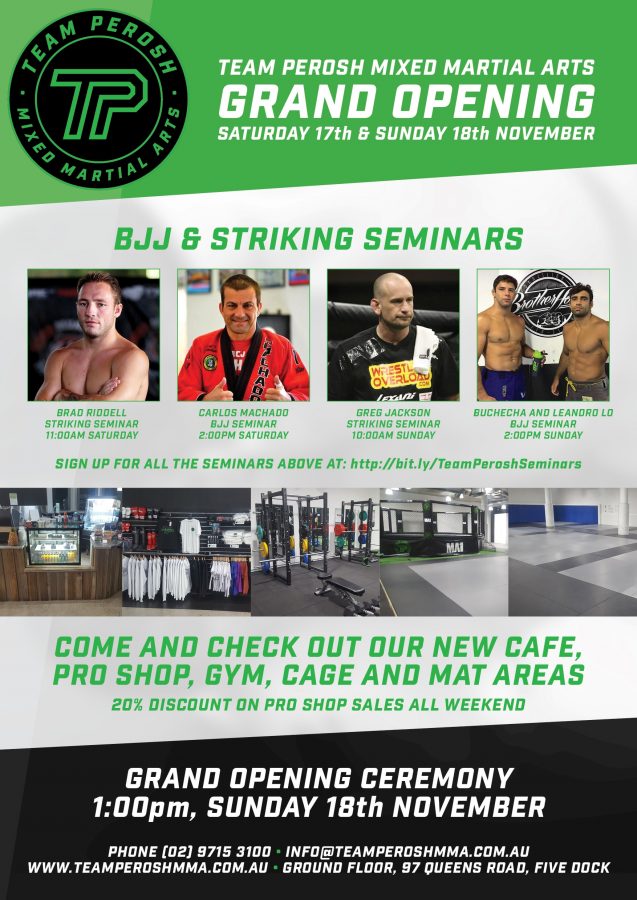 Team Perosh Mixed Martial Arts is having their Grand Opening 17th and 18th November. We are celebrating moving to a 1000 square metre location from our humble beginners of teaching one class per week in a Karate school 18 years ago. We now teach 28 classes per week to 600 students teaching MMA, BJJ and Muay Thai Kickboxing.

We have organised 4 monster seminars two striking and two BJJ. The two BJJ seminars are my BJJ coach Carlos Machado on Saturday and then World BJJ Champions Marcus “Buchecha” and Leandro Lo on Sunday. For striking we have Former World Kickboxing Champion and UFC coach Brad Riddell and my MMA coach and one of the best MMA coaches in the world Greg Jackson.

The opening ceremony will be on Sunday 18th November at 1pm.

These seminars are open to everyone from any academy and affiliation. A lot of tickets have sold already. Don’t miss out so book now.

Hope to see you there! 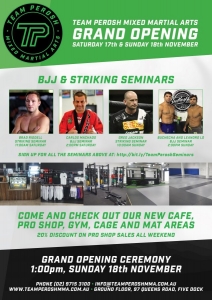 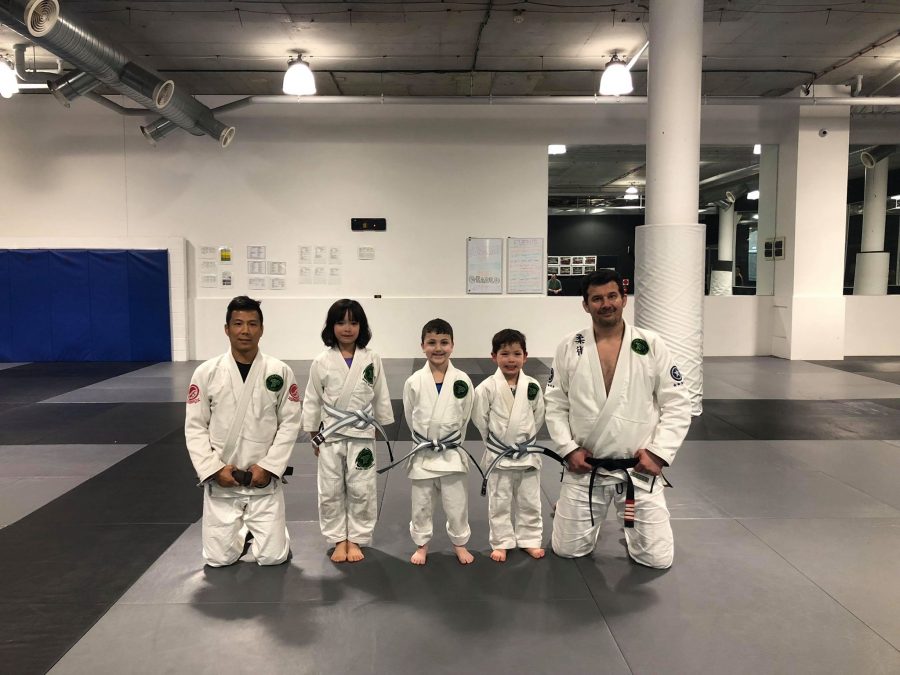 Congratulations to the adults and kids who graded in our Brazilian Jiu-Jitsu (BJJ) and Muay Thai Kickboxing make up gradings! 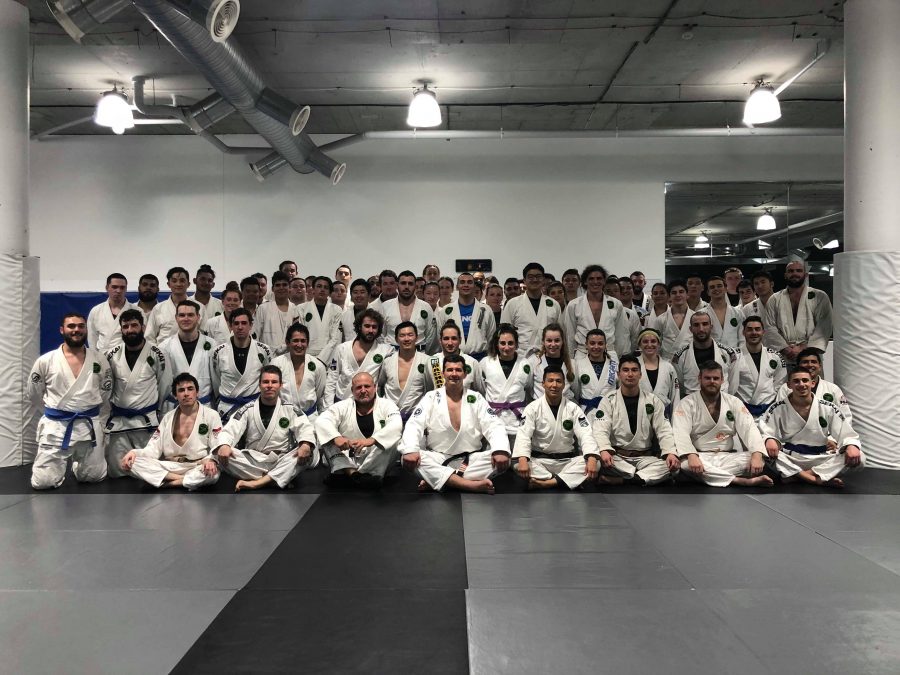 About 200 students graded at Team Perosh Mixed Martial Arts in BJJ (Brazilian Jiu-Jitsu) and Muay Thai Kickboxing including both adults and kids.

In adults BJJ students graded for their stripes on their white, blue and purple belts.

About 100 of our 5 to 15 year old kids graded in our 3 Kids BJJ and 1 Kids Muay Thai Kickboxing classes. 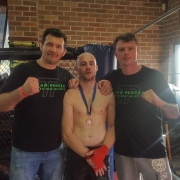 Team Perosh student Matthew Thompson lost his Muay Thai match at the Muaythai Australia NSW Development Day in Sydney on Saturday 21st July. It was his debut match and he has only been training for 1 year. Matthew did his best and that is all you can do! Thank you to Liam Bohan for coming out to support and help him warm up. 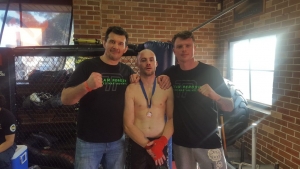